There are many American Indian tribes native to the Southwest of the United States. 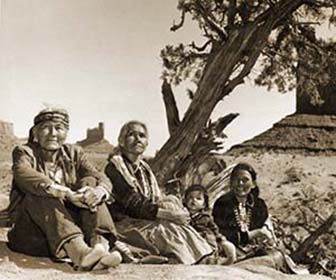 These Southwest Tribes are located in Arizona, New Mexico, and Colorado (the southern section). There are five tribes from the Southwest: Apache, Hopi, Navajo, Pueblo, and Zuni. Most of these Southwest Indians lived in villages and farming was their main occupation.

Southwest Indians create many beautiful pieces of art. They make pottery, clothing and baskets that are still sold in stores and arts and craft shows. Because they are very spiritual tribes, most of their art contains symbols and signs of their beliefs, dreams, and visions. The pottery is for both every day use and display. The clothing they make can be anything from an outfit, such as a dress with gorgeous flowers on it, to a elaborately decorated headdress, full of feathers. The Zuni and Hopi Southwest Indians carved dolls, called Kachina dolls, out of wood. The dolls were decorated with masks and costumes to represent the Kachina spirits. These dolls help children of the tribe learn tribal ceremonies.

Turquoise is a stone used in quite a bit of Southwest Indian jewelry. The Indians look at it as a stone that promotes health, happiness, and good fortune. The Navajo Indians are also well known for their silver belts and jewelry. They learned to work with silver from the Mexicans. Perhaps the greatest skill of the Southwest Indians is in their basket making. After hand weaving the baskets, the Southwest Indians decorate them with colors and patterns. The methods the Hopi use to make baskets have not changed in hundreds of years.

The naming of a newborn baby is such an important part of the Southwest Indian culture that it is not done by the parents, but relatives and tribe leaders. Hopi babies are not named until 20 days after they are born. Most Indian babies spent the early years of their life strapped to their mothers in what is sometimes referred to as a papoose. Young girls learn to help around the camp, doing chores such as making food, weaving baskets, and sewing. Young boys of the Southwest Indian tribes learn to make weapons and hunt.

Discover your Ancestry!
It's time to find out who you really are...
Need Help Researching Your Indian Ancestry?

Buffalo, Weapons and Wolves and many other topics related to American Indians.

Arts & Crafts, Jewelry, Turquoise and many other products thought of as American Indian.

Legends, stories and research materials with a common theme related to Indigenous Peoples'.

Indians.org has been committed to, "Serving the Tribes, While Sharing the Culture" since 1995, dedicated to the preservation and accurate presentation of the rich culture of the American Indian, your generous support is greatly appreciated.
Click Here to give an online gift.